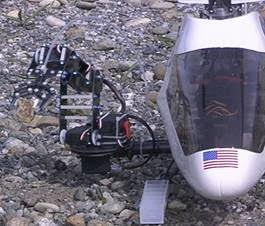 This is not a presentation about autonomous helicopters. This is, instead, a talk about rotorcraft that are robots—i.e., VTOL aerial platforms that have some level of capability to transform their nature and/or manipulate their environments. Autonomous system technologies, coupled with the development and maturation of novel aerial vehicle concepts (both fixed- and rotary-wing), leads inevitably to new design paradigms for aerial robots. In that spirit, a number of mission and design concepts for “rotorcraft as robots” are discussed and their merits and limitations are noted, as well as future opportunities for development. The objective of this work is to inspire future generations of aerospace engineers, intelligent systems technologists, and roboticists to develop systems that can address critical societal needs and application domains such as planetary exploration, field science campaigns on Earth, environmental monitoring, disaster relief and emergency response, wildlife conservation, and new aerospace transportation and distribution systems.

Larry Young works in the Aeromechanics Office, NASA Ames Research Center. Larry performs research in the area of advanced aerial vehicle and aerospace system conceptual design. Among his current and past projects are studies into fundamental vortical flow physics, tiltrotor aeroperformance and aeroacoustics, planetary aerial vehicles, vertical lift autonomous aerial vehicles, rotary-wing vehicles for disaster relief and emergency missions, metropolitan aerial transportation systems, advanced tiltrotor aircraft design, and “rotorcraft as robots.” He was an early researcher into Mars rotorcraft and other vertical takeoff and landing vehicles for planetary exploration. He is a member of the Ingenuity Mars Helicopter team and mentored Phase A student intern work performed on the Titan Dragonfly project that helped lead to its New Frontiers mission award. He was the principal investigator for the NASA Aeronautics Research Institute (NARI) Phase II study into metropolitan aerial transportation systems, a.k.a. Hopper networks, one of early studies into what has become known as eVTOL and Urban Air Mobility (UAM).

If planning to attend, please register for the virtual webinar here:
https://ahs.portal.membersuite.com/events/ViewEvent.aspx?contextID=87f8e057-0078-c533-d848-86c11b8ee82c

Become a member or renew your membership